I love Tim's July Tag!
Don't you???
It's Perfect for a travel theme! 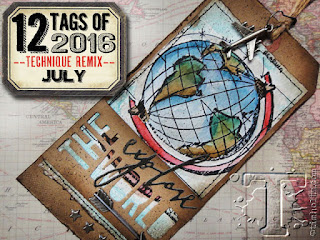 If you would like to make Tim's Tag...just follow
this link for all the directions you need to create it.
http://timholtz.com/12-tags-of-2016-july/
Tim ALWAYS AMAZES!!!!
This man is like an EVER READY BATTERY!
The ideas just keep on coming!
So Tim provided my inspiration, time to gather
my supplies to create my very own July Tag! 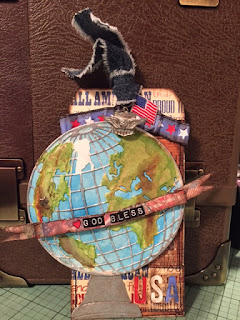 I having been wanting to use this die for a LONG time.
It was really a lot of fun to work with and once I
began painting it....I couldn't wait to see the end results. 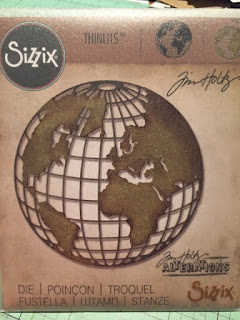 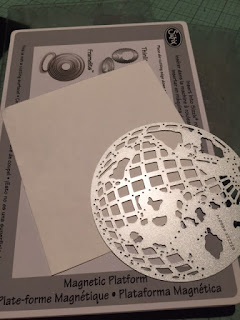 This die was deceiving in it's size, but as you can see,
it took center stage on the tag without any problem.
WOW...the details on this die are fantastic. 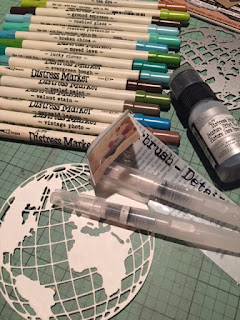 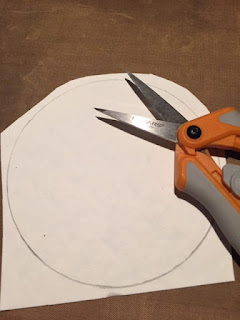 I used this circle as a base for the world die.
Because this was such a large space,
I ended up switching to Broken China
and Tumbled Glass Distress Inks along with
Tim's Waterbrushes to color this circle,
for the ocean blue base.
I like using the distress ink pad for coloring larger areas and
using the markers for smaller detailed coloring. 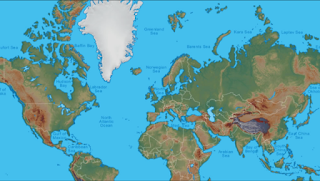 I found this photo of the world map on the internet.
Having a visual was helpful to me when I started
coloring the world. 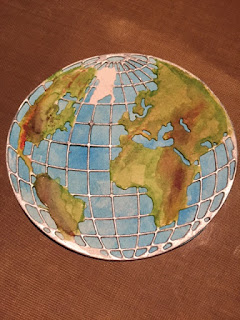 So now I attempted to pick a back ground paper. 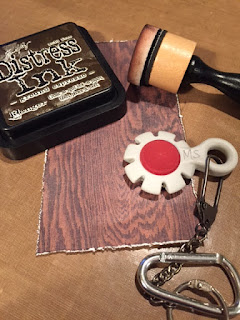 I cut it, distressed it, inked it...and after all
that I thought the paper was just too dark....
I am thinking about changing it ....but I will
continue to work on my tag .....Mmmm
yep...I will have to change this paper. 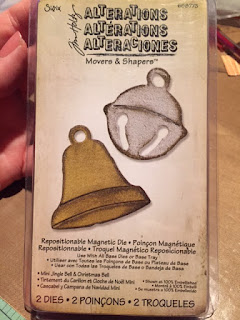 I want the world globe to be on a stand...
I didn't want it floating in space.  So I used
the bell die and cut some chipboard.
Then used some Pewter Paint on top
of it to give it some shine and inked the
edges with Expresso after it dried. I then cut
the loop off the top of the bell and then
cut off the curve of the base. I thought the globe could sit on this. 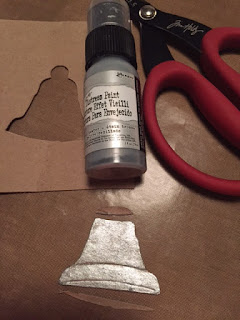 Next I placed the globe on top of this and
realized I needed to make a slight bowl in the
top of the bell for the circle of the globe to sit on.
I just turned the bell over and traced the curve of
the globe on the back and cut it with sissors.
The top outside edge points needed rounding too after making
the bowl...a tiny little snip is all that was needed. 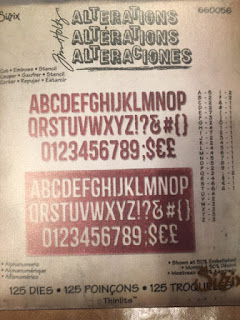 Time to make the word strip at the bottom.
Something simple:  USA
with RED, WHITE, and BLUE watercolored
underneath. 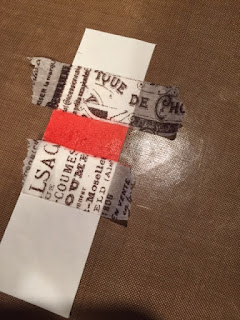 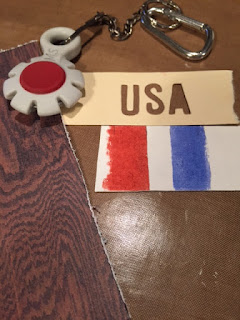 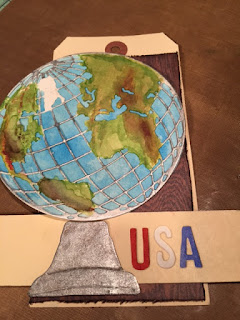 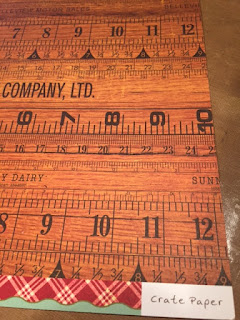 So I repeated the process with cutting, distressing,
and inking.
I am going to try something out of my
comfort zone....I am going to try and stamp with
different colors on the stamp ...I hope this turns out
so I don't have to redo anything.  I put a little tape runner
glue on the cut out letters and set them back inside the letter.
This protected the watercolor letters since I had already
glued the two parts together.

I like to keep the insides of letters to glue on after
cutting...like the triangle in the A and the circle in the O. 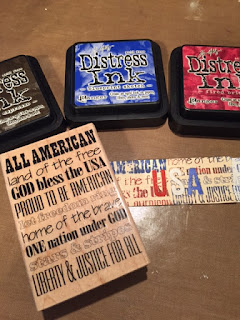 I really "LOVE" how this turned out. 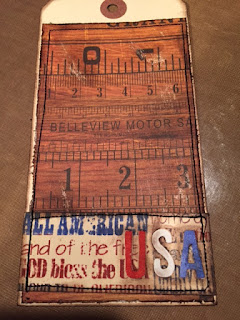 I don't normally ink with the distress inks, but
they were calling my name here.  I also stamped
this same image at the top of the tag in the blank
space there....Next....time to sew around the edges. 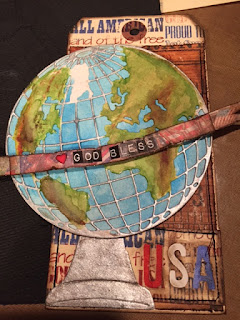 Almost done....A banner hand cut from Tim's Seasonal
Paper Stash Pad...(the Tattered Banner Die was too wide for
the tag).  It got it edges distressed and inked too with Expresso.
I used Tim's Tiny Types (cut down in size) for
the words, GOD BLESS.
Then an inked heart cut from the Fiskars Heart Hand Punch found it's
home on the banner.
What next...it still looks unfinished to me. 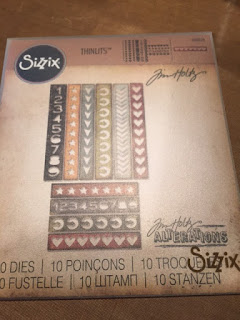 A paper ribbon made out of the star die ....blue cardstock with
red and white cardstock behind the blue...inked with
Expresso and stitched.  This fit perfectly accordian folded at the top.
Then one of Tim's Star Fasteners on the USA continent, a flag pin at the top, some
military wings painted with Pewter Paint and hung on a couple of jump rings,
and some AMERICAN blue jean material for the ribbon and I am
FINISHED!!!!!
2016 July Tag:  GOD BLESS USA!!!! 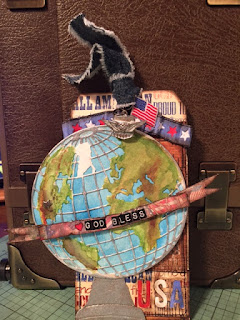 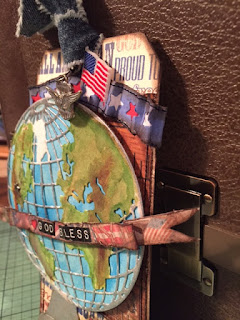 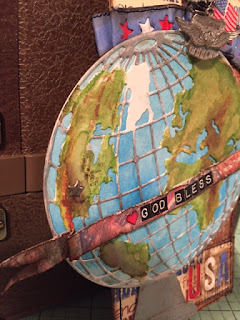 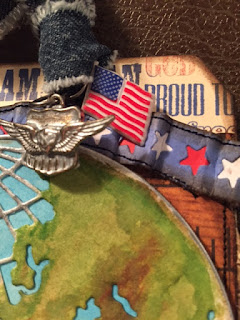 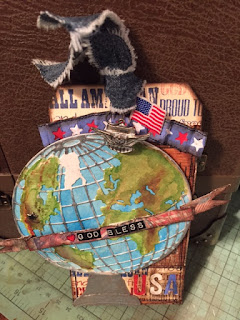 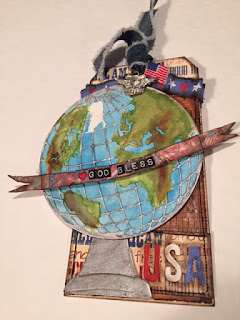 Happy July....
Thanks for stopping by and as always....
Feel Free to leave some "LOVE!"

Posted by Mylissa Stout at 9:17 PM 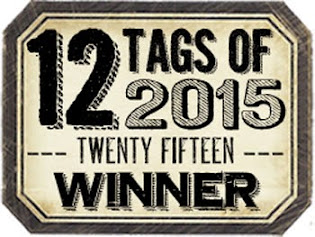